Previously, we implemented a GenericList<T> class that stores a collection of objects of type T as a linked list. The basic functionality offered by the GenericList<T> was as follows:

While these methods provide basic functionality for storing items in a collection, the structure is quite limited. In particular, there is no way to accesses the items in the collection directly. In this note, we will describe a way of iterating over the list so that its contents may be examined. You can download demo code with the following link: 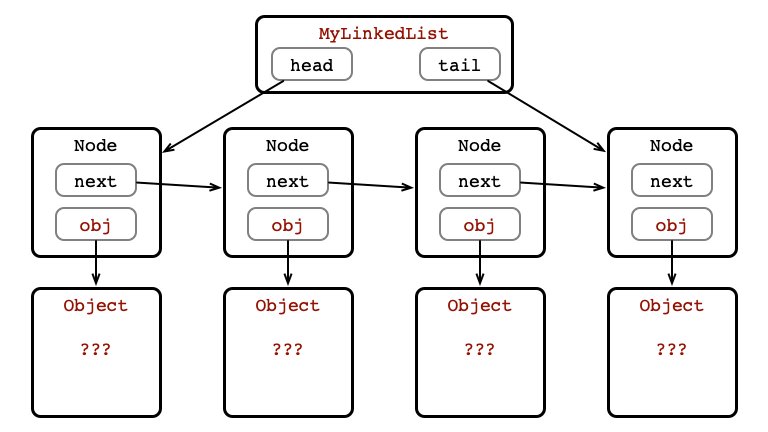 In code, we implemented the GenericList as follows:

Suppose we’d like to find out what items are stored in a linked list. How might we accomplish this given the implementation above? Specifically, we’d like to offer similar functionality to the following example with an array:

It is not clear, though, how to implement such a procedure, especially if we want to hide implementation details (i.e., Nodes) from the user. What we want is an iterator: an object that stores a current location (Node) that (1) returns the item stored at the node, and (2) updates the current location to the “next” location in the list. Java provides a standard interface for such functionality, called the Iterator<T> interface (click to see the documentation). Specifically, an Iterator<T> needs to implement two methods:

For our GenericList, we can implement an Iterator<T> as follows. We make the class another inner class for GenericList since it refers to the inner workings of the class:

Now, given a ListIterator, we might want to iterate through all items in a GenericList as follows:

Unfortunately, this code is quite ugly. Moreover, we cannot execute Iterator<SomeClass> li = new ListIterator(), because ListIterator is an inner class for GenericList (as it should be!). To get around the latter problem, we can declare that GenericList supports functionality for iteration by having it implement the Iterable<T> interface (see link for documentation). That is, we should provide a method that creates and returns an iterator for a particular instance of a GenericList. The following modifications turn our GenericList into a list that supports iteration. Along with this new functionality, we upgrade the collection’s name to IterableList:

But generally, we’d like to avoid seeing iterators in our code at all! Thankfully Java supports a construction for iterating over Iterable collections: the for-each loop. Using a for-each loop, the code above becomes:

The loop above is read “for each item in myList…”. This is so much better! To see IterableList in action, download the following program. The main method is in IterableExample.java.