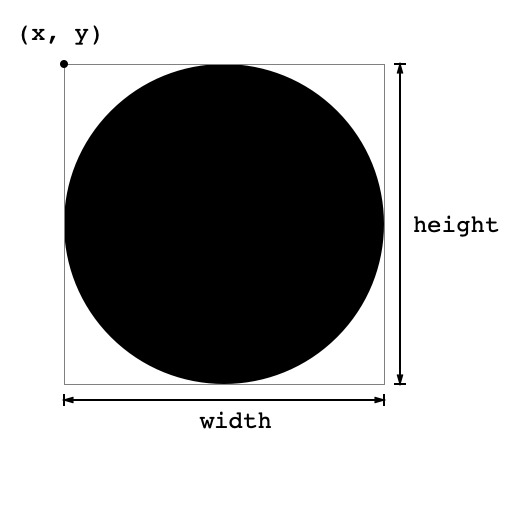 Depicted above is the blob together with its bounding box: the smallest axis-aligned rectangle that contains the blob. The bounding box is specified by the \((x, y)\)-coordinates of its upper left conrner, its width, and its height.

In the case of a blob consisting of a single disk, it is easy to compute the area of the blob using the well-known formula for the area of a disk \(A = \pi r^2\). However, what if we have a more complicated blob, like the one picture below? 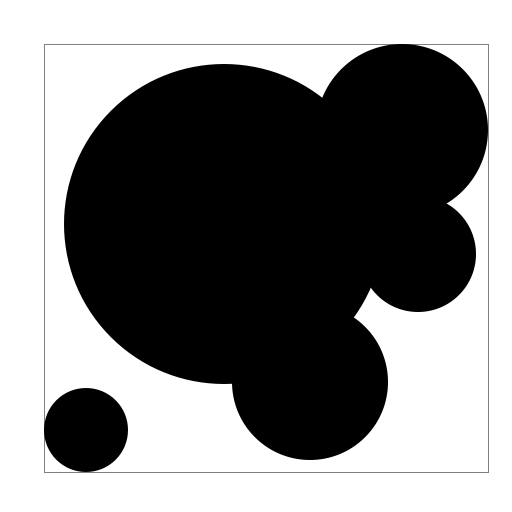 This blob consists of 5 disks. I am not aware of any nice formula for computing the area of such a figure, so in order to estimate its area, we will use a Monte Carlo simulation. The idea is as follows. If we generate a random point inside the bounding box—say, by throwing a dart at the figure—the probability that the point hits the blob is the ratio of the area of the blob to the area of the bounding box. Symbolically:

Thus, in order to estimate \(A_{\mathrm{blob}}\), we need only estimate \(p\), the probability that that a randomly chosen point in the bounding box hits the blob. We can obtain an estimate of \(p\) by repeatedly choosing random sample points, and taking as our estimate the proportion of samples that land in the blob. Symbolically:

For example, suppose we generate 25 random points in the bounding box of previously depicted blob: 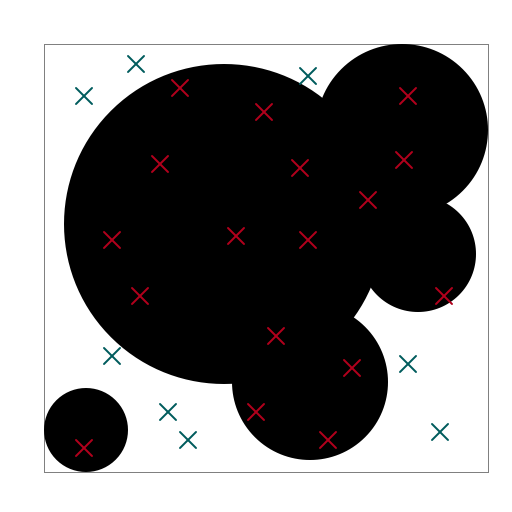 We may need to produce a lot of samples in order to estimate the area of a blob accurately, but thankfully computers are good at doing a lot of computations quickly!

Your task is to implement a Monte Carlo simulation to estimate the area of a blob. To get started, download the program files below:

You will implement the main methods in Blob.java. The Blob is represented as ArrayList<AbstractShape> shapes, where the individual elements of shapes are the constituent shapes making up the Blob. Specifically, you should implement the following methods:

In order to generate random points for your Monte Carlo simulation, you can use the Random class—see the Random documentation here. Specifically, to generate a random point (x, y) in the bounding box of your blob, it is enough to generate x and y separately using the nextDouble() method for Random (doing some transformation to ensure these numbers have the appropriate maximum and minimum values).

Submit all code needed to run your program to the Moodle site by Friday, April 16th, 11:59 AoE. Additionally, please fill out the survey linked to from the Moodle submission site.

The lab will be graded on a 3 point scale as follows:

Additionally, extra credit will be awarded for early submissions (up to 4 days early) as specified in the course syllabus.

Here are a couple of suggested extensions:

If you complete an extension, please include a README file with your submission explaining what you did and how to use it.